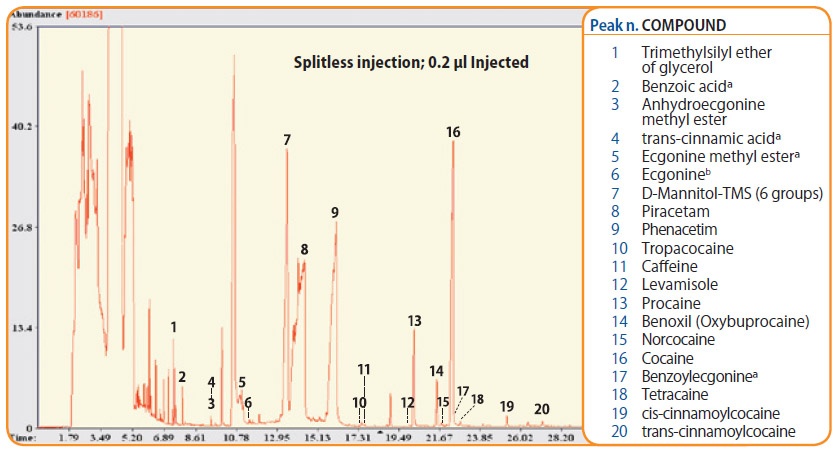 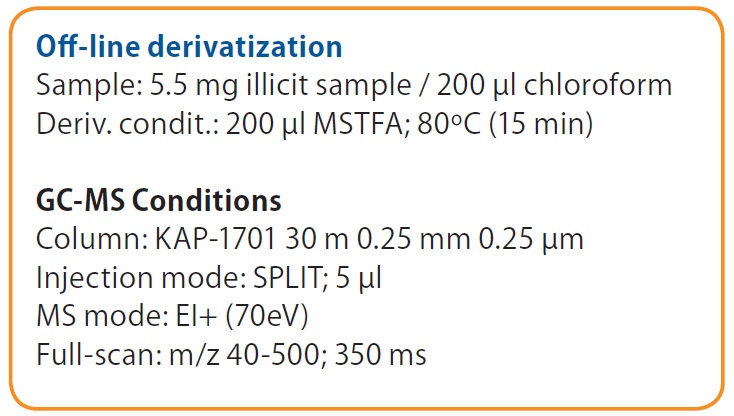 Changing the Split injection mode by Splitless/split allowed the identification of 5 additional alkaloids and cutting agents with pharmacological effects, such as LEVAMISOLE, used as cancer chemotherapy drug.
High peaks were eluting at the front part of the chromatogram corresponding to derivatization reagent by-products and artefacts that can damage and reduce column lifetime.

KONIK K2 HPLC+GC-MS system has proved to be suitable for the determination of major and minor components in iNicit cocaine samples. The method allows the automated analysis of polar/non-volatile components by direct derivatization into the interface, avoiding the time-consuming off-line sample derivatization step. The on-line derivatization HPLC+GC method shows high sensitivity, allowing the identification of alkaloids and adulterants in illicit cocaine selectively eliminating derivatization reagent by-products. So, the K2 system allows determining the compounds with less sample consumption and guaranteeing longer column lifetime.

Additional work is being performed for the automatic determination of drugs of abuse and toxics in biological samples through on-line derivatization into K2 interface after HPLC fractionation of drugs, toxics, and their metabolites in different body fluids and other samples.

HPLC+GC-MS, the ideal technique for ever changing matrices

We use cookies to improve your experience. By your continued use of this site you accept such use. To change your settings please see our policy. Cookie settingsACCEPT